Garth Greenwell is a poet, author, literary critic and educator. His poetry was published in The Yale Review, Boston Review, Poetry International and many others. A native of Louisville, Kentucky, he holds graduate degrees from Harvard University and the Iowa Writers' Workshop, where he was an Arts Fellow.

In  2009-2013 he was a teacher at the American College of Sofia. His firt book Mitko dates back from this period, and is published in Bulgarian by "Zhanet-45" (translated by Nevena Dishlieva-Krasteva). A revised version of the book forms Part 1 of his latest novel What Belongs to You published in 2016 by Farrar, Straus and Giroux. The novel is received exceptionally well by the critics and the audience. It is so far named one of the "Best Books of 2016 So Far" by Esquire, Slate, Vulture, The Telegraph, Minnesota Public Radio, Bookish Buzz, and Cultured Vultures. It's also included in The Guardian's "Best Holiday Reads 2016".

What Belongs to You is a gay love story that takes place in Sofia. The city and its Mladost neighbourghood has a tangible presence in the text, it is in fact a character of its own. Garth Greenwell is also a promoter of Bulgarian literature in translation, speaks Bulgarian and has authored the New Yorker review of Physics of Sorrow by Georgi Gospodinov. Garth is a frequent participant of Elizabeth Kostova's Foundation workshops in creative writing held in Sozopol and Sofia.

The Bulgarian translation of What Belongs to You is by Nadhezda Radoulova, published by Black Flamingo publishers in Sept 2016.

As a writer-in-residence at Sofia Literature and Translation House, Garth Greenwell worked on his new books, a collection of stories about Bulgaria.

Public events Video from the event: 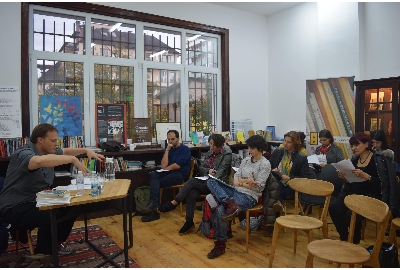