Peter Krasztev (1965) is a cultural anthropologist, a literary scientist, a docent at the Communication and Society Department of the Metropolitan University in Budapest. He teaches creative writing and works as a literary translator from Bulgarian, Macedonian and Russian into Hungarian. His academic articles and essays are published into thirteen languages. He is interested mainly in topics related to Central European culture and society and has authored a monograph on symbolism in East-Central Europe. His last book, The Hungarian Patient (CEU Press, 2015) includes research of anti-authoritarian civic movements in contemporary Hungary.

During his residency stay in Sofia, Peter Krasztev was translating Milen Ruskov's novel Vazvishenie („Възвишение") into Hungarian which was published in Hungary in 2018. 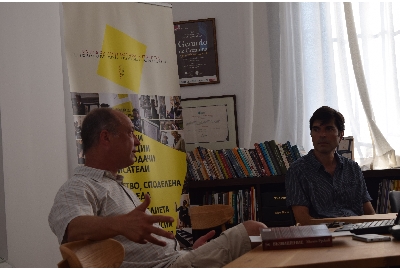